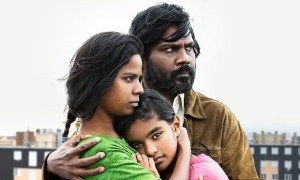 In one of James’ Macclesfield talks he invited us to imagine what it would feel like be to be a wee kid in Pakistan speaking Urdu and with a large connected family fully embedded in that culture who is uprooted when his family comes to England.

I couldn’t imagine what that would feel like but this film brought me a little closer – a ‘put together’ family ( a way of using a dead families passport)  fleeing the fighting in Sri Lanka  is followed as they try to find their way as refugees in a foreign country.

As a Native American Indian saying goes you have to walk for two moons in someone else’s mocassins before you can judge them – (and then your understanding of their situation would be so great that you wouldn’t!)

The loss of everything which seemed to comprise your identity is gone, can be turned to nothing, no value, no use, in fact sometimes the opposite in this different setting. A completely foreign language, religion, culture, politics, schooling, family relationships,etc. to get used to and to try to work with. Its a phenomenal undertaking for someone in good physical mental and financial health –  rarely the luck of refugees!

The film does evoke some question marks well covered i think in this review: