…and i have a fondness for alliteration!

I looked up the word ‘hubris’ when i first came across it a little while ago and thought it a useful word… it means insolence, arrogance, such as invites disaster:overweening… and boy, are humans capable of manifesting this!

‘Cape Horn marks the northern boundary of the Drake Passage and is where the Atlantic and Pacific Oceans collide. For decades it was a major milestone on the clipper route, by which sailing ships carried trade around the world. The waters around Cape Horn are particularly hazardous, owing to strong winds, large waves, strong currents and Icebergs; these dangers have made it notorious as a sailors’ graveyard.’ (wikipedia) 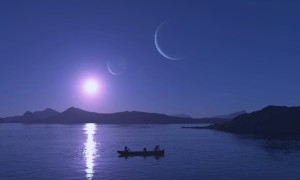 So what would current health and safety rules make of a family taking a 12-year-old in a tiny open boat, hollowed from a tree trunk, around Cape Horn?  The native Patagonian with the links back to his pre-Colombian ancestors who was interviewed in this film made the passage twice (the first time when he was 12) yet now, at late middle-age, he’s not allowed…the men with big ships say it’s not safe to for him to do this.
He is one of the remaining few with the knowledge of his ancestors and the ability and desire to use it.
His people were water-people, they knew how to read sea, the winds, the thousand miles or so of shoreline, the weather, and how to navigate by looking at the sky. The younger generation does not have this, those that remember the old days and ways are dying out.

They lived like this from pre-columbian times for thousands of years but in the early 19th century Patagonia was mapped by a British naval officer and later, in exchange for a mother-of-pearl button, one of these people was brought to England, to London for two years…and then returned. Unsurprisingly he was never the same again.

Europeans and Chileans then brought the Patagonians the teachings of Catholicism, put them into school, unwittingly gave them clothing permeated with unknown bacteria (for these naked painted people had to be made decent and covered up) and herded them together, onto an island off the coast.
Their faces in photographs, before and after, said it all…and their numbers were soon decimated.
Later the remaining indigenous people were hunted… money was paid for the testicles and breasts of adults and for the ears of children killed. This made room for proper people to do proper farming and live as people should….well that was the thinking at the time!

Yet the farming is not that successful. The torture (for killing sake, not to extract information…that was already known) and disposal of the victims by helicopter into the sea under the military dictatorship which overthrew the socialist Salvador Allende’s rule (with some help from others…if you are interested you can easily discover who) in the 1970’s is another sorry addition to the story…  under his rule there had been a movement to return land to the indigenous people.

If you have time you can see it tonight at the Exeter picture house cinema. I found it  shocking and poignant, with some astonishingly beautiful photography… another, generally unmarked, holocaust.