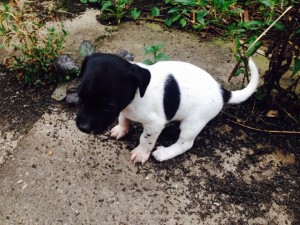 In an earlier life….  we had just started living on a farm,  everything was in a great muddle and I was exhausted as we tried to make sense of the existing arrangements and animals and work out what to do next…

The neighbours’ dog had just given birth to nine puppies… and we had a daughter, whose life also had been disrupted by the move, who really really wanted a puppy.

Thinking ‘dogs and farms go together’… as a guard dog a Jack Russell/ springer spaniel is really not at all scary but can give an alert! – maybe in the long run for moving stock – as a companion… A teacher at a previous school had said she felt that children without a dog had been deprived…and how much more difficult can it make things?

…so next we bought a puppy.

My sister-in-law at the time trained dogs for competing at Crufts and helped our daughter choose The One. He was like a small Snoopy, big soft brown eyes, silky black ears, a white mottled body with a black spot on the side…and soon showed a very friendly lovable nature.
I just looked and this cross is seen to be loving of everyone… and their dogs… with an energy level high enough to be ‘mental’. Fairly accurate I should say : ) Dog owners and their dogs often seem to have some kind of resemblance.

But we couldn’t just play with him, even if we had the time. This dog would, at the very least, need to come when called and leave the sheep alone. So ‘dog-trainer’ was a new, extra, role to take on.

Clicker-training – using a sound and food, then just sound, to reward and train good behaviour… and socialisation classes followed. However when chasing rabbits and pheasants (which I don’t think he ever actually caught) his interest in coming when called was non-existent… although he would turnaround to look at you to show he had heard!

As for the sheep… the thrill of getting a large number of these white furry things moving… and then going faster… so he could chase them faster… was worrying to observe; prior to our arrival dogs had been worrying neighbouring sheep.

As farmers see the distress caused, and the profit lost in vets bill’s and the waste, their determination to catch and shoot the offender in the act increases. Their anger over this had been expressed to us… so I invested in an electric collar.

When later I told a vet’s wife that I had done this she was truly appalled, many dogs have been deeply traumatised by the mis-use of electric collars. It is true that many are of too nervous a disposition to be suitable for this way of training, also the approach needs to be very thoughtful and systematic when it is being used for recall…and with just the right amount of whack applied when training to leave sheep alone.

This particular cross breed – terrier/spaniel – tends to be pretty bombproof and irrepressible, and also I took my time and was very careful with the training. For a month before use we would go about carrying the  device that sends a signal to the special collar around the dog’s neck. Then one day in full sight of the dog starting to chase the sheep, press a button. The collar receives a signal and gives a shock strong enough to take the dog off its feet… For him it was like a bolt from the blue/sheep in response to his behaviour. His respect for sheep and distance from them was maintained all the time that  he was at the farm and the lady who owned the sheep said ‘I would always trust your dog with our sheep’.

For any who are still unconvinced of the kindness of this shocking action, years later my heart quailed to hear that the traditional way of dealing with this common problem with farm dogs is to wrap the dog in a couple of duvets and put it in a confined space with a ram. The ram will try to kill it… but you rescue it after it’s taken a battering and hopefully learnt to be respectful!

He also learned to come when he was called but was pretty hopeless at moving the stock as he was a bit scared of cows and a bit bouncy for the piglets. He learned respect for the cat who settled his jumping up by planting claws directly into the top of his head… resulting in an egg shaped lump and a large veterinary bill…and was (mostly) a pleasure to have around, with his softness and zest for life.

Things changed for this dog after I left the farm and a new person came in with their dog.  Ball chasing was completely different – as the ball was thrown he chased the ball but this new dog chased him so he had to zig-zag. Life was less comfortable for him, no longer ‘top dog’, and he could be blamed for trouble rather than the newcomer.  But when after a few years the new dog died he was very sad and spent time looking for him, lying with his nose level with where this dog used to lie under a bed.

Then he re-located with his owners, they started to travel overseas and they left him with friends.
He started to wander… he started to chase sheep…
he returned with blood around his mouth so he was horsewhipped…
Maybe that helped with the sheep chasing but my understanding is that the correction has to be applied at exactly the moment of the mistake otherwise the dog can assume it is being punished for returning or some other behaviour.

Clearly the circumstances had changed, he was unsettled and unhappy and his behaviours naturally changed with that. Who would want to re-home him with that history, would he have to be put down?

This is a Christmas Eve story and it does have a ‘happy ending’ –  grandparents who knew him agreed to take him so he is now a good-natured companion dog for them and their other dog. He does not go off the lead unless he’s in their paddock but now he’s an older dog this is nothing like the imprisonment it would have felt like earlier in his life.

Older, greyer, plumper, he has become more territorial and proprietorial – so his attitude towards other visiting dogs has changed – but he is warm, content, well-fed and well loved…unlike so many of the two-legged friends and other beings with whom we share this earth today.

so firstly a Christmas quiz

a) is this dog real… that is to say is it enduring through time, un-changed, independent of other factors?…

b) so could it be true that birds that live on a golden mountain take on the colour of the sun?

c) So although he had the same name… was the dog the same dog all the way through?

d) Did we each create our own dog from what was there or was the dog self-existing?

e)Did the sheep see him in anything like the same way as we did?

f)Is a puppy a small furry human? What’s it like to be a dog? Can you speak dog to dog or only human to dog.

g)  although I named, trained, fed, cared for, and protected this dog was he ever ‘mine’

h) in the same way are our children ‘ours’, entities which can be known, controlled and treated as possessions?

i) are you and i ‘things’ or manifestations?…driven by karma or arising responsively?

Then, as for the awful circumstances others face… being alive to those situations brings us into mental connection and diminishes our own encapsulation and self-involvement. As we eat, others are going without food…. as we get dressed others may just be pulling on whatever old dirty clothes they have… as we practice the dharma others lack the freedom or understanding to do so… This understanding helps drive the determination to find a way to be helpful which eventually goes beyond, as well as including, ordinary helpfulness.

Connection is a given… and if it comes with a light touch – no dogmatic assertions, directions or appropriations – it can be so beautiful.  I  found this link to the first reading from Letters from South Africa on Radio4   poignant and moving…maybe you’ll enjoy it too.