We took this little dog, the one i mentioned in the previous post, down to the beach one day… his first trip to the seaside!

He was very very excited by this new environment…what with the waves and smells and sounds… so many new experiences….

And then a kind of game got going – stones were thrown… and, just like with a ball at home, the dog went chasing after them to retrieve them.

Of course he couldn’t…he would run after the stone very fast, tracking it through the air, but each stone landed among so many other stones.

You could see he didn’t know which one to pick up and bring back, he looked puzzled… but as the stone-throwers kept throwing there was always something new in the air for him to chase after.

I’m sure he very much enjoyed the running but I wasn’t so happy with the lack of completion… something maybe a bit unsatisfactory from the dog’s point of view…but it was ‘good fun, good excercise’ from another viewpoint.

The next morning I went to give the dog his breakfast… this dog enjoyed food and it would vanish in a flash… but on this day he looked very sad and didn’t eat anything.

Something was clearly wrong so I took him to the vet who also thought something was wrong… the dog wouldn’t let us open his mouth so that we could see inside to see if maybe he had picked up a piece of stick which had got stuck, or some other damage.

So that meant an examination under general anaesthetic  was called for.

When I collected the dog afterwards, in the evening, the vet said that it was very strange.  The dog felt pain, even under the anaesthetic, when he tried to open his jaws – and that was unusual – however he could find nothing wrong.

So the dog came home… and the next morning eat his breakfast as usual!

No further problems so ‘one of those mysteries’ I thought at the time.

Some of you meditators may be well ahead of me here… it was only years later when I started to directly feel the impact of fusing with thoughts, experiencing the effect in the  body, that I gained an insight into the likely cause of the problem.

My guess is that each time the dog ran with the intention of grasping that stone between its jaws and bringing it back to the people who were throwing. It wasn’t just that his legs were moving when he was running… a whole set of occurrences in his body happened at the same time priming him, getting those jaws ready to catch… over and over again.  The fact that he couldn’t actually catch the stones that were being thrown wasn’t being processed and I suspect that the clenching of muscles that would have gone on over many hours without a relaxation, rather a building of tension, eventually put the muscles into spasm.

Like us in the ordinary way, all kinds of movements are happening even before we are conscious of having ‘caught a thought’ (the work of the ‘sticky-hand’ egoic-thought)…and in fusing our attention into that we are taken for a ride.

So the jaws clamp on but nothing is actually caught and we don’t go anywhere…yet it’s exhausting…and can lead to spasms in the body.

All the anxiety, worry, lack of sleep… lead to more anxiety and all its bodily manifestations…no rest…

Whereas meditation – letting ‘things’ (thoughts, stones etc) be; relaxing out of grasping at these ungraspable showings – leads to…

well, take a look if you like (James Low – The sun of ungraspable awareness)  – the ‘no-method’ and result…

the enjoyment…poised, relaxed and at ease… attunement arising from emptiness. 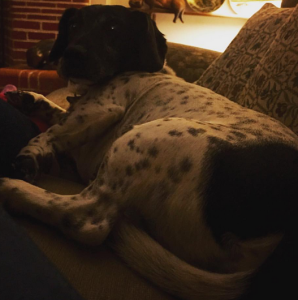 As do the movements of this ‘not-so-active’ dog

…. the dog that we create for ourselves by the application of our concepts to the colours in the shape on the left.
P.S. As you, and as the Buddha knew, the answer to question posed in the title is…. suffering!