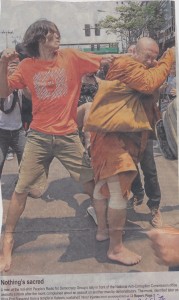 He is about to hit him in the face with his ringed fist but does this man hate this monk?

Well, he’s angry for many many reasons – only one of which is that the monk reported to the police that the demonstrators (of which he is one) had assaulted another man… but he knows nothing about the monk apart from that. He has his opinions and beliefs ….some quite different from those of the monk and some will be  quite similar yet the monk has become a symbol onto which he can project all the  stored frustrations and sense of injustice that he has faced in his life so far.

As Milarepa said ” you menace others with your deadly fangs but in tormenting them, you’re only torturing yourselves.”

He’s projecting the bad out, onto the other … tightening up his heart, his mind, his body, to mete out ‘just desserts’…. in this case onto someone who would not fight back. Taken over by his afflictive emotion the result of his action is a photograph which has  the effect of arousing sympathy for the monk (not what he intended) and this action will do nothing to diminish his own suffering.

The thinking is often that ‘things aren’t working out the way I think they should…and who’s fault is that – well it’s their fault’… So if we punish them or get rid of them that will make things better… right?!!

Has this ever worked?

No…. because it’s never just one person’s or groups’ fault that a situation as it is. In relative reality each situation arises due to a concatenation of events, many many factors have to come together for its occurrence…. and it is then interpreted through our own mental filters and mixed with our concepts and prejudices.

Opinions arising from this process cannot be taken as reliable. The ‘alien other’ has the same nature as ourselves and deep buddhist practice is very much about working with the enemy within… the grasping onto a fixed sense of ‘I’ with all that arises from that.

As that felt sense of separation, feeling oneself to be a separate  self–existing entity, starts to dissolve then tolerance of difference increases and aversion decreases, and situations become more workable.  There is more appreciation of the showing of different forms – the radiance of the mind, empty of inherent self–existence.

…here’s a bit more  from Milarepa

If hate reigns supreme, it chains us to hell.

Dulll ignorance makes us no better than animals.

Growing passion ties us to the world of men.

If jealousy takes root, it leads to the realm of warring gods.

Overbearing pride traps us in the land of the heavens.

These are the six fetters that chain us to samsara.

…and maybe if you have time check out the latest vimeo  Seeing clearly and acting gracefully  where the internal definitions and anxieties leading to a contraction – as with the result of the recent referendum – are explored.

P.S. It’s hard to see… but underneath the monks arm there is a rather disturbing figure (you can see this if you click on the photo so it comes up big), a little lady who is really happy and laughing  to see such sport…

…its a very different kind of happiness that we wish for all beings!