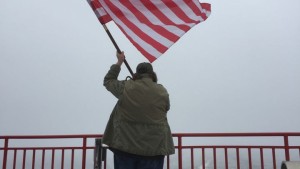 This film is maybe good  to see  after watching The Divide..it shows much that’s good in other   countries’ ways of living.

It’s not a film which I would have thought of going to see… but a friend wanted to and I was in town…so i did and was glad.

It’s not in fact about which country America is really about to invade next…. but about comparing some of the best of humanitarian attitudes in other countries, for example with regard to education, workers rights, attitude towards criminals ( bankers and others!) and contrasting them with what generally happens in the USA.

I had heard of the prison off the coast of Norway where maximum security offenders are treated with respect and rehabilitated  in such a way that the rates of recidivism are astonishingly low compared with the U.K. and U.S. and it was a treat to see the quality of the relationships, both between the inmates and the inmates with their guards…. violence being meted out by the police is unimaginable to prisoners and guards alike. Here prisoners are trusted with the use of large sharp kitchen knives for food prep. in the kitchen…and they are used just for that!          I remember hearing that the training for those working with offenders in prison is lengthy, often at degree level, in countries  where there is a genuine interest in rehabilitation and re–education rather than punishment…the training in our country can be just a matter of months.   Recently there was mention of an intention of making prisoners in this country work productively and there is footage of American prisoners doing just this which is so dispiriting. Their living conditions and working conditions are so poor and they are paid maybe as little as $.37 an hour for franchised work…the contrast is stark.

Having heard a bit about the educational system in Finland it was delightful to see  the faces of the teachers  in whose aim is to  facilitate the growth of healthy happy communicative  citizens,  and who  feel that our method of ‘education to pass standardised tests’ is deadening and diminishing to the potential of teacher and the child. These children have no homework… home time is for friends, family, living life.. not bowed down by hours and hours of homework, in fact they have almost none – yet their educational system is producing students with some of the highest functioning in the world.

In our country we work long hours (though not as long as the USA) and our productivity is a lot lower than in many countries which work shorter hours. The film shows employers in other countries  who actually care about the happiness of the workforce and appreciate the positive impact resulting from involving them in decision-making… and also having them on the board of directors.

There are countries with eight weeks paid leave, generous maternity/paternity leave; countries where those who are stressed can go to a spa on prescription…. it is cheaper than treating people with depression ( way back in 1990 this cost was $44 billion in the USA  of which drug treatment was 10%, one quarter was due to treatment and the rest to absenteeism and premature death… I haven’t looked but I should imagine it’s a great deal more now)

I have heard a senior official in the drug squad pleading for decriminalisation… I don’t think many people wanted to hear what he had to say even though it was clear that he was in a position to know what he was talking about.
In Portugal drugs are not an issue, not a matter of concern for the police, but rehabilitation is  freely available. The Portuguese police who were interviewed appeared horrified and saddened at the lack of humanity in the use of the death-penalty in the USA.

French children, even in deprived areas, who all sit down together for an hour and enjoy a very high quality school meal at lunchtime. Passing food and drink between each other and chatting….lovely!

Yes…  this is  a quick breeze across the upside of many countries.. yet the relaxed faces speak volumes about the healthy impact of the humanitarian attitudes shown. It was a pleasure just  to listen to and see the faces of people around the world who were concerned for the welfare of those around them and were prepared to orientate their lives away from  ‘looking after number one’ to looking after the welfare of the wider community.

A Tunisia woman who had been educated in Paris (and knew much about the USA) was filmed begging for an interest from the USA in that which was good about her country….

Other countries have other problems and for sure there’s no quick fixes, as you shift one thing it has an impact on others (written pre-referendum!)  … but there is much non-fattening food for thought for both the UK and the USA about how to live well in this film… if you’ve a mind to see it.