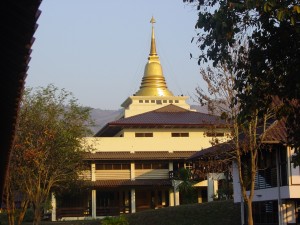 Some years ago I was doing a strict Goenka vipassana retreat in a monastery in Thailand… the sitting for ten hours a day was hard for someone used to sitting for short periods.
Each day I looked around me  and everyone else seemed to be coping just fine – ‘a bunch of crack meditation ninjas’ – and I thought it was just me, so unused to this kind of practice, who was really struggling with discomfort.
There was no communication allowed during the retreat between the participants  so we could not compare our experiences or encourage each other verbally…yet somehow or other a little nun from Korea and I mostly got up to leave the meditation hall at the same time  every evening…

Two days of the retreat had been billed as being particularly difficult – the first turned out to be easy for me and the second was very very difficult, the pain in my legs was becoming intolerable. At one point, fearing becoming crippled due to the impact on an earlier injury,  I was granted permission to use a chair but that seemed to make matters worse as the blood pooled in my legs, so I went back to the floor and gritted my teeth. I have a reasonable amount of willpower and used that to get through  that day… but that wasn’t the end…. there was the next day and more! The next morning, for the very first time, I skived off to the toilet in the early hours of the meditation and after that it was downhill all the way and it became so hard to stick with it…

Then I remembered a teacher saying ‘well – if you can’t do it, you just can’t do it’.
This may not seem very profound but being able to accept that I might not be able to do it brought about enough relaxation for me to hang in there while my legs shook and shook until they settled and I found that I was still practising after the teacher had left.  On this occasion he had walked out quietly without giving notice of his departure… usually there was a bit of a countdown… and I had been counting the seconds believe me!

So it got easier… in fact it got to be pleasurable – extraordinary! – and that was when a big ‘downfall’ occurred. We had been warned not to indulge in any pleasurable experiences if they arose…the  thought of this happening seemed so remote that the instruction barely registered. But then I remembered ( having indulged!) and the world changed – this is the interesting bit.

Prior to indulging in these feelings I had been in a kind of  heaven… albeit a somewhat painful one. The  setting was beautiful with a river nearby. There were flowers and sunshine and a golden dome and starlight and birds and food which was – edible, and  I was doing something I felt to be meaningful.

Then suddenly, with this enormous sense of shame at having not followed the instructions, everything changed. I could no longer look at people, I could barely eat, all the colour had drained out of the environment, it had become  monochrome, grey…there was nothing to wonder at… just my dismal thoughts that there was no point in my continuing, that I wasn’t worthy enough to be there or to do the pilgrimage which was to follow.

Then I thought my way through the inevitable conversation when I returned – ‘so why didn’t you do what you to set out to do?’ ‘Well you see I was in a monastery and I hadn’t done what I’d been told to do so obviously i am not good enough to be following in the Buddhas footsteps… so I came home.’
I imagined the somewhat  disappointed acceptance of my returning thousands of miles to say that…. and thankfully, I started to sound foolish to myself and to realise that this was all part of the ‘growing up’ process… and the world started to lighten up again for me.
In truth I started to lighten up the world, just as before my thoughts had darkened the world. The food, the monastery, nothing much changed while I went on this mental journey and so the truth of – “Everything has mind in the lead, has mind in the forefront, is made by mind” (Thomas Cleary’s translation of the first few lines of the Dhammapada)  became very vivid for me.

I had been swept away by thoughts with which my egoic sense of self (another thought) had fused. Believing in the truth of them any awareness, or sense of presence had been completely lost. Then, lacking spaciousness, i had collapsed into being a ‘no good’ object for my judgmental ego-self. Luckily that little hell didn’t last for too long; thanks to impermanence and karma some more useful thoughts arose which i could use as a rope ladder to climb out…not the method of choice but all i was capable of at the time.
Any dzogchen practitioners reading this will know that any kind of  thoughts can arise and pass in  awareness as an aspect of the arising field …but fusing with them and taking them to be definitional is as wise as jumping out of a high window in the belief that you can fly…
…ah well, it takes practice and growing confidence which was part of the reason for the pilgrimage!

As for not doing things exactly as instructed… well under my particular circumstances  that was quite understandable. Really, as always, it was just a matter of learning from  that slip, letting go of it, and carrying on…and when i did just that i was finally practising properly –not  hooking into any sensation.

Making the mistake meant that I also had a glimpse of the truth that forcing myself in order to succeed might get me to a ‘goal’ but not much past it… it was the relaxation coming from looking ‘failure’ in the face which allowed me to continue.
Dzogchen in particular is not a practice of  anxious striving but of a profound relaxation from which manifestation arises precisely in relation to the emergent field …and as James has said more than once “it’s a marathon, not a sprint”

At the end of the retreat also it became clear that my assumption that I was the only one suffering was completely unfounded – we all were; some of the exuberance and joy expressed  was related to the retreat experience… but quite a lot to do with the ending of it and the release from silence and tension!

The little nun and I hugged each other…

… and then we were told off for breaking ‘Sila’…’good grief’ i thought ‘what have i done now?!’

…. however the nun was vey happy about the hug… and we did something lovely with any merit gained in our practice then

…and i hope she is very happy now and that her practice is going well.