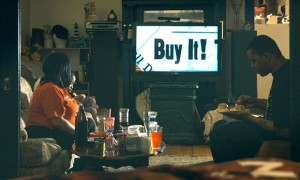 The focus of this film is the vast ‘wealth divide’ where the top 0.1% of the population of the UK and USA have wealth equal to that of the bottom 90% – illustrated through a look at the lives of seven people.

It was very poignant to see footage of the lived situation of the people at the bottom of the economic divide, and their faces, as they spoke about trying to make ends meet and survive… but also the faces at the top – there is not much joy or freedom in their bunkered situations… manicured and deadened…

Heidegger said ethics is ‘first philosophy’…what is for the benefit of all? This is not operational here. One delightful female banker who had had qualms about the sub-prime market said that ‘when you remove ethics you become very efficient’. Perhaps in some ways it seems so… but the Walmart employee in the film had, prior to the changes within the company, loved her job, felt valued for her contribution both in ideas and behaviour. Through the changes which removed that culture of appreciation and included shifting to unknown flexible hours – the company itself was devalued. She was about to become homeless and did not look likely to survive for long.

The cinema was almost full but, as the man sitting next to me said, ‘unfortunately the people who needed to see this wouldn’t be watching’. But i thought, even if you could get them to watch many, because of their conditioning, would just see people who are a ‘hopeless’, a ‘waste of space’, a ‘drain on the economy’, ‘losers’.

Yet in the USA the ‘KIP’ schools, which operate in in hugely deprived areas and whose overriding focus is to get their students into college, succeed with 33% of their kids…compared with, i think it was, 8% for other schools in these areas of deprivation and a 32% national average …also their students tend not to drop out…

There are many stories of prisoners who turned their lives around with the help of the genuine love and support of others, and people whose lives have changed as a result of being seen to have value – having this different way of seeing themselves reflected back through someone else’s eyes.

You might enjoy this episode of desert island discs with John Timpson and the enlightened attitude to ex-offenders shown by his son, himself, and the firm.

Behaviour patterns tend to insist but have the potential for transformation if they are recognised as such and given space to resolve under a light and kindly attention. There is a beautiful quote which i paraphrase(having lost the original) as……..

” Birds that live on golden mountain take on the colour of the sun”.

So many many factors, causes and conditions, bring about the circumstances in which people find themselves…from a dharma perspective, in ‘relative reality’ karma is operational. So whilst hoping to equalise the ability to utilise the opportunities available is unrealistic… the attitude that genetics or social circumstances are definitional and that it is acceptable to ” fiddle away that which has come to you while Rome burns” does a violence to the potential for people to grow and to show themselves in many different ways… and ignores our interconnectedness. Everybody has ‘buddha–nature’ and to be indifferent to the state of others is to diminish ourselves.

A 70-year-old venture capitalist raised a laugh in the cinema as he explained very determinedly (after a long list of his activities, assets, and achievements…ending with having three children under 13) that he was a ‘Creator’…he was far from thinking that ‘all this will end’, that this ‘self’ is insubstantial and ‘disintegration’ is also on the list.
The possibility of awakening was never part of his game plan…a plan conditioned by his family, mental aptitude, the culture of the time…influenced by so many factors.
Prior to the crash the words ‘greed is good’ were heard without much if any irony; being ‘something in the city’ was admired, and when times were ‘good’ some of these people felt that they could walk on water…and some still do…but it’s ‘for a while’…and was it only the bankers who were greedy or is there some projection going on here?
Life is short how shall we be? We are lucky to know we have choices…and whether or not to judge others may be instinctive, a choice influenced by virtuous intention or, in awareness, no-choice.

A while ago I spent some time with people living in poverty… they had mostly flour and water to eat and drink. The flour was mixed with water to make the major part of their meals and the water was not running water but they had to fetch it in big plastic containers from a tap some distance away. They lived in little caves, just one room, no ensuite!

So these people are near the bottom economic heap and need our help to raise their standard of living…I wonder, shall we create a charity?

I am joking… these were some of the happiest people that I’ve met in my life… no amount of money would make them happier, they were practising the dharma…life had meaning well beyond self-concern.

To be able to practise for the welfare of all beings continuously one doesn’t need a cave…just a heart that’s open to suffering and a desire to practice according to our capacity ….decreasing the divisions created in the mind.