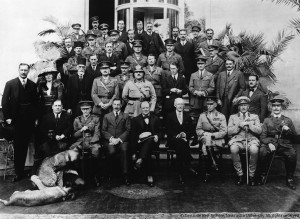 ca. 1921, Cairo, Egypt — The delegates of the Mespot Commission at the Cairo Conference. The group was set up by Colonial Secretary Winston Churchill to discuss the future of Arab nations. — Image by ? Hulton-Deutsch Collection/CORBIS

In the little place where I live, a small village, there is a lot of warmth and friendliness and there is also fear and hatred.

What do people here hate?
Well…it’s a strange mixture. There is a man who hates flies – loathes and detests them– and one who hates cancer–which he feels has stolen the lives of people dear to him – and there is one who, while mostly a great bird lover, can’t stand pigeons!
There are those who have expressed xenophobia and one man (no longer living here) who thought I should be very afraid of a woman whom he suspected of being a powerful witch. There was also a time when a ‘witch’ ( in his opinion), but someone different from the person he was warning me against earlier, expressed the view that, as a dangerous influence, he should be run out of town. Soon after that this man, who owned a machete, and threatened to use it, was expressing his hatred of people who abuse women and was ready to do violence to the person he saw as a perpetrator. He himself it transpired had been abused as a child.
I have chosen to mention these extremes of attitude but each person also had much more moderate and kindly and aspects to them… like most people they were not ‘one thing’ but varied according to circumstances. An extreme example is Idi Amin’s daughter  who found him to be such a lovely dad that she really couldn’t believe the stories of what he had done to his countrymen.

Soon after I took the Bodhisattva vow I found myself in a small field with about twenty other people who were in varying states – from anger through to rage at times. Their unhappiness was very understandable but it made me think about this vow and how it could ever possibly be fulfilled – so much unhappiness just in one little field… if you magnify that up to the size of the world, all beings in the world, the universe/multiverse…. the amount of unhappiness seemed unbearable. This led to despair, then some unusual experiences, and  with that the words that I was ‘looking at the hate and not the love’ which dispelled the agony. Realising that there is no way that I, as an entity working with entities, can fulfil the Vow, and that a completely different view is required didn’t come until much later.

There is a saying that there will never be peace on the outside until there is peace on the inside… and I can see that this is completely true.
These hatreds have more to do with the holder of the hatred than the object of hate… and if you can see the sudden change in facial expression, muscle tone, and breathing, of people as they express these hatreds you see what damaging tensions and tightness they are living with on a daily basis. Repressed rage and anger which is often unacknowledged to the point where people feel they are essentially calm and reasonable, can express itself in these projectile explosions from time to time. Some event hooks that anger or hatred and it is projected onto and into situations remote from the original event.

I remember once listening to an interview with a holy man who was revered as a Christian;  someone who spoke holy words, spreading words of goodness and kindness as he walked about on the Mount of olives, being interviewed as to why he  thought it right that Palestinians should be prohibited from coming through the gate in the wall which the Israelis built. They wanted to tend to their olive trees… their livelihood, which was by now on the wrong side of the wall.
It seemed a reasonable request but as he spoke, in his response you could hear, in the tone of his voice, an extreme tightening that had nothing to do with being reasonable. As he spoke he revealed that some members of his family had been killed in an explosion for which he held the Palestinians responsible.

In another interview I heard a man saying ‘we are a vengeful nation’… members of his family had being killed and from this he knew who the enemy for his lifetime is, and he would pass this knowledge on through the generations, this ‘knowledge’ and hatred become embodied. The recipients of this knowledge and those who will be viewed through this particular distorting lens will be remote from the event in time… the whole situation may have radically changed, but thoughts from the past will tend to hold the lens in place.

To see the bigger picture is not to make excuses; within relative reality there are reasons for everything… but it’s not just one factor but many many factors, linking back and across through time, that have to be in place for the one thing to occur.
Letters from Baghdad is a film I hope to see shortly which points to the effects of British involvement in Iraq after the First World War. Its a documentary about the life of Gertrude Bell, the adviser to the British government on Mesopotamia, who had an influence in the the foundations of the desperate situation which is resonating today.

I have to admit that my own knowledge of history in many aspects had not gone far beyond the Ladybird books of childhood until relatively recently… so I was not sneering when I responded to someone standing next to me waiting for a planning officer who was asking me why we were giving money to India when they didn’t want it? It must be guilt! he said. I suggested that we, as a country, probably make donations for many different reasons including, along with hopefully some altruism, trade and politics. As for guilt… although I don’t think that is relevant factor… I explained a little bit about the annexation of many Indian principalities and the use that land was put to…. this was all news to him.
We only have the view from where we are… but it’s surely very much more complex than we might like to think.

Since the British, in 1839, made the first of their three invasions  Afghanistan has been invaded and in conflict so often that there has not been peace for longer than living memory.…and what a mess has resulted from these impacts ( this link is to a Guardian page with a brief explanation). All of those killed on all sides have relatives… interventions in the Middle–East have not sorted things out, quite the contrary; things don’t get sorted out like this.
People desire stability and in order to achieve that that they tend to use control and the greater the fear/ aversion, or desire, the greater the effort to control.
Win-win is not the order of the day… the pound(or oil field) is either in my pocket or yours… so it had better be mine. We could share it but instead we fight over it… and this is the result of the human condition…. of pride and greed and anger and jealousy arising from ignorance.

This won’t be resolved simply by an injunction to love one’s neighbour as oneself…. the strong conclusions about what is good (what I know like and appreciate) and therefore what is bad (all the rest which is not merely neutral) are mostly held to so hard and fast that they are extremely difficult to overcome even with the best of intentions. The ego knows what’s what…!  Until there us genuine care, a softness and tenderness for this little self, flowing easy and natural, then efforts to love others who we don’t take to, let alone those who have done us harm are going to founder on rocks of judgement.
But if love can be seen as the wish for all beings to have happiness and to know the causes of happiness i.e. for them to become enlightened… we can pray for that with diligence!… enlightened beings  are satisfied and so they don’t go around attacking people…. and if love naturally arises from wisdom then studying and practising the dharma  has to be the most effective way to go.

The Buddha has  has quite a lot to say in the Dhammapada about abandoning thoughts  about those who have harmed you in order not to live in hate…. and later the dharma leads to hearing that….. the way out of the maze of the confusion of samsara is through and with all beings…
I felt very stupid when I first heard this; I had absolutely no idea what was being talked about… but I can see that in experiencing the  ‘common denominator’ of all  it is possible to appreciate the different showings or shapings of manifestation without becoming averse to any – they have the same ground. And if this  ground, this openness, is the ‘home base’ from which activity arises, then it is then possible to work with the arising circumstances for the greatest benefit of the entire field, rather than according to personal desire, dogmatic diktats or popular assertions….
The notion that good deeds are done by good people that bad deeds are done by bad people might make sense on a quick look but it is a statement worth a lot of looking at, from a dharma point of view.