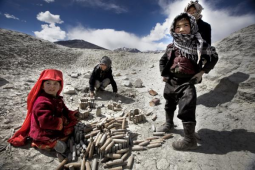 On 11 November the cinema was less than full – in fact only four people had come to watching this extraordinary and impactful film.

The number watching was no indication of its quality – its evocation of the complete madness and irresponsibility of the war in Afghanistan and its enduring legacy, of the energy and resilience of the children and of scenery of great vastness… of harshness and beauty.

A gang of Afghan kids from the Kuchi tribe dig out old Soviet mines and sell the explosives to children working in a lapis lazuli mine. When not dreaming of the time when American troops finally withdraw from their land, another gang of children keeps tight control on the caravans smuggling the blue gemstones through the arid mountains of Pamir.
SYNOPSIS

In this seamless blend of fictional and documentary form, we experience a stunning cinematic journey into the beauty of war-tormented Afghanistan. Shot over seven years on evocative 16mm footage, first-time director Pieter-Jan De Pue paints a whimsical yet haunting look at the condition of Afghanistan left for the next generation. As American soldiers prepare to leave, we follow De Pue deep into this hidden land where young boys form wild gangs to control trade routes, sell explosives from mines left over from war, and climb rusting tanks as playgrounds-making the new rules of war based on the harsh landscape left to them.  De Pue’s transportative and wonderfully crafted film confronts the visceral beauty and roughness of survival, serving as a testament to the spirited innovation of childhood and the extreme resilience of a people and country.  – Sundance Film Festival

This seems to be available free to download on the internet.