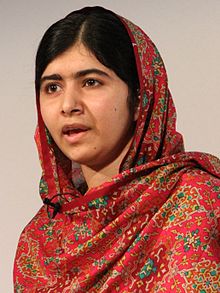 I was helping a neighbour with something a bit tricky  and saw that she had the book “He named me Malala” on her bookshelf. I had already been toying with the idea of going to see it, so that triggered my asking if she would like to come with me.

By watching other people, who are not essentially different from us, as they  embody characteristics that we feel we lack, we can get a sense or flavour of that tone and absorb it. Courage and the determination not to be overawed by circumstances, with a sense that your life and the life of others matters come across strongly in this film and afterwards the neighbour, who is ‘finding her feet’ after a difficult time said that she was so thankful to have seen it and would remember it until she died!

As I was watching the film I enjoyed memories of journeys to different but somewhat similar places, imagining smells and warmth evoked by the pictures of the streets and countryside appearing in front of me.

I saw  pictures of Malala and her  family members showing different expressions –  a proud dad, a brave girl, a smiling mum, cheery brothers – simple comments that fitted the pictures shown of these doubtless complex and variable characters.

By bringing my own imagination into the picture, I could conjure up the fear they were living with.

I could imagine the smell of the plastic as the videos were burned in the street.

I could think how shocking for her to be with her friends sitting in class and then be faced with a man carrying a gun who shoots at her and her friends because she had been bold enough to speak out about their situation and to name the  people who were  having such an impact on their lives.

I could try to imagine how her mum and dad felt after she was shot… but the film moves so quickly onto the next image.

I thought how lucky to get such good surgical care.

I thought how lucky to have a team of physiotherapists to help her to get better.

How lucky to have a cochlear implant fitted as the repairs to her skull were being carried out.

How lucky to be living in a house, safe in Birmingham.

How sad to be living in a house in Birmingham leaving behind the colours smell, connections, history culture and weather of her homeland.

How nice to be talking with other girls like yourself in different countries.

How lovely to be able to deal with awkward questions so charmingly.

How nice to have a Dad cooking breakfast.

How hard not to feel able to be understood by her classmates.

How busy and directed her life is.

How calm and confident she seems.

How having a purpose gives her life a shape.

What a nice smile and giggle she has.

How lucky we are if we have inspiring teachers and the chance to learn.

How tricky it might be for her to find time/space for other relationships and interests.

–– just a sample of the huge number of thoughts which arose while watching the film.

There I was, sitting in a chair inside a cinema in England, watching a projection – points of light forming images of light of different shapes and colours – and listening to such a variety of different sounds.

As i watched this display so many thought and feelings arose and passed; and it was out of the movement of energy – of sound and light– in combination with these thoughts and feelings, in that theatre of experience, that i experienced my own film.

Later another friend who had seen the film asked me in an email what i thought about it, and Malala.

I had stopped thinking about it … I could say something…but, as always with experience, what can be said about anything is like saw-dust compared with the experience itself….. A few sentences of concepts, biased by my own viewpoint, relating in a backwards way to something which has gone sounds as dull as ditchwater. Experience is unique and evanescent, whatever i said would only be  some touch of  connection…

…so I mentioned some of the good qualities which i had seen in that portrayal of Malala. Then, partly because this person had mentioned the quiet beauty of Malala’s mum, i thought some more about her and said how big i thought her heart must need to be in order to be at ease with the time Dad and daughter spend together, and how hard it must  be for her to cope with our lousy weather, the awkwardness of trying to communicate in a foreign language, and the sadness of the loss of connection with her way of life back home…

…we really do speak to each other across a void using words which are often such poor servants, also we have little idea, unless we are with the recipient, as to how what we are saying is being received.

So it’s not possible to be certain that you will enjoy this film; our moods, expectations, stress levels, critical judges, the sound volume (of the film and sweet chomping neighbours), the comfort of the seat, the ambience, tiredness, biases and our own interpretative matrices can all affect our appreciation.

It could feel a bit like a very impactful news-reel but If you do  go to see it i hope you also will enjoy it. In my case cake and coffee beforehand while looking out at the city lights, and the neighbours enjoyment contributed to my own!

P.S. Apparently the book explores the situation in greater depth.

From a practitioners point of view…..

I once asked James about the authenticity of an object in my possession and he just made a whirling motion with his fingers….reminding me that within relative reality there are many interesting conceptual avenues down which I could  wander, all of which will remove me from awareness …That ‘I will never be caught by a thought’ is the leitmotif which, until stability is gained, can easily be overwhelmed by strong emotions. So, for meditators, the chapter in Simply Being, The Expansive Oral Instructions: 3, the five perfections, is very helpful in instructing how to remain relaxed in our own place, regardless of the thoughts arising in response to the five senses.

In this way all thoughts are liberated in natural freedom and so whatever arises in the mind becomes an aid to meditation.