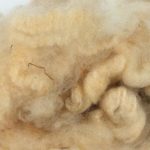 In mid July I was in a little tent with some friendly faces talking about the view of dzogchen under the title ‘Who dies, who dances?’

Over the years I have taken different props with me, from crystal droplets to bubble blowers. This time it was to be a little box of sheeps wool collected from Dartmoor.
In the event I left it behind… things have been pretty busy lately… but it didn’t much matter because it’s fairly easy to imagine. So I thought I’d see whether the metaphor means anything to you.

If you take a piece of sheep’s wool and try to look through it… that may not be possible.
If you squeeze it and squash it into a little box then, of course, seeing through it becomes impossible.
Cold water washing won’t help but will stick the threads closer and hot water washing will felt it so that it will be quite impossible to see through.

But if you gently tease it apart so the little strands of wool separate, you can see the space that was always there and you can see right through it.

It’s a bit like the mind because… when we as ‘subject’ focus our attention onto the thoughts, feelings and sensations – the threads – which arise (the movements of the mind) as if they were objects, we become mesmerised and lose touch with the spaciousness from which, and back into which they go. With this comes more sense of solidity, density, weightiness, certainty…which increases the sense of being a separate subject and decreases the ability to see what’s really going on.

A deception is played out so often it seem true… inflation of the ‘I’-thought, believing in it (and with that the thought-threads wrapped round it) as a true identity.  Then relating to other arisings depending on the perception of their impact upon our created construct.

Seeing how any trick is performed requires very close attention. There is usually a moment of created diversion, a distraction, and during that moment of slippage the sleight of hand is performed…

When you know how it’s done you can still be taken in…it’s a big habit, easy to fall into…but instead of saying ‘you got me (or got to me!) again’…you know you confused yourself!

There’s a great poem by Portia Nelson about how you can reposition yourself relative to the hole in the pavement. Meditation which allows the mind to move but does not follow the movements – is a practice which goes with that. ‘Oh..i’m tightening up, narrowing my focus, condensing, putting weight into story-line, falling down the hole’….relax, release…begin again…

The more we fuse and entangle with the tanglings the tighter things get.
Relaxing more into the spaciousness, holding a very wide-angle view… this allows the con-fusion with the tanglings to release, we don’t have to tease them apart. ‘Tanglings’ then move as the transient energetic display aspects of the mind itself…movements which awareness, or the mind itself, doesn’t grasp.