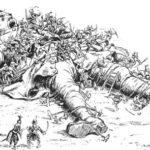 What a distressing picture I beheld as a child…. opening the book ‘Gulliver’s travel’s and seeing the poor man stretched out on the ground and pinned there by hundreds of tiny ropes. There were so many that despite their insubstantial nature he was fixed so tightly to the ground that he could not move at all.

Since then both she and I – and no doubt the lady in Morrisons – have been captivated by many a thought.
Knowing what’s  good for you when you hear it one thing… consistently applying the advice for long enough to bring about a change is very much another!

At first noticing the difference between moments of openness… and then the felt tightening in the body as an attention-invested identity-thought fuses  (or goes into a fugue) with another…or  noticing the rudderless, life-consuming drifting, and the ‘home-coming’ in meditation… over and over again. Being helped  to understand the nature of thoughts, the nature of the mind… the dharma has so much to offer us. Seeing what is going on and releasing from these old habits, allowing the thoughts to move freely without locking on…
It’s no quick fix…but it can be done…and it’s not a bodge job which just keeps your head above water!

Keeping some form of meditation going through all the ups and downs – not resting the oars – is great if you can. Some just drift away after a while…but some, like this dharma student, find that after each period of disconnection with practice the healthiness of the return becomes more evident. She recently told me that she had realised that it was the only thing that was really going to help her.

Gradually you reset your own compass away from the rocky shores into the open waters…the threads that seemed to hold you, fixed in place and time dissolve…and freedom from the mind-forged lilliputian manacles is yours!