A few days ago i heard that His Holiness Chatral Sangye Dorje Rinpoche attained parinirva at the beginning of this month, at the age of 102.

When i received this news i was very struck by these photographs of him. 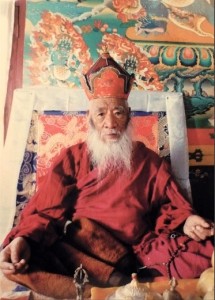 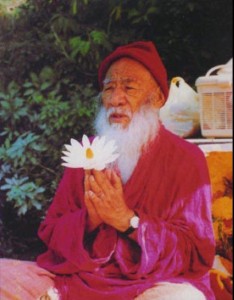 These are images of a great Lama, a Lama of Lamas…an embodiment of the dharma, the result of intense unwavering practice.

In the beginning Chatral Rinpoche undertook the starting/ Ngondro practice fourteen times in all. This is a practice which is normally undertaken just the once (and completed with great relief  as each of the five constituent ‘nails’, or re-orientations, is repeated a hundred thousand times). So this would involve making a commitment of time, i think, well in excess of seven years but each time he came to the end of the practice he felt clearer and stronger and so began again.

Following this he received many profound teachings from the great teachers of his time and then set about putting them into practice.

At first living with the goal of attainment of the dharma for the benefit of all beings, and then living to bring the benefit of that practice into our troubled world in the manner appropriate to his way of being, he had different roles including that of a wandering practitioner hermit, a teacher to the most fortunate, a liberator of beings in captivity and also, later in life, as a husband and father. All this was accomplished with integrity – the  activity of compassion which arises directly as the expression of profound wisdom.

As far as possible he avoided worldly entanglements, would not waste his time teaching those whose hearts were not ready to accomplish what he could offer, and he was highly disciplined in his practice. Going to sleep at ten and waking at three, the day was filled mostly with practice… fitting in what else needed to be done in the late afternoon and evening. On retreat in the mountains he would use the practice of tumo to keep from freezing and lived on tsampa (ground barley flour) rations and whatever plant matter was edible when supplies ran short. However it would seem that like others i have met living under somewhat similar conditions his ease of being far surpassed those used to haut cuisine.  His ‘retreat centre’ was his little tent or a cave for shelter…no heating, air conditioning or piped water.  He lived very simply and the donations which he received were used to benefit others…no ‘lining of his pockets’ – no pockets to line! Also he completely eschewed politics.

So self-cherishing was long gone, realisation achieved, and his commitment to all beings could not have been greater….how many like him remain in the world?

His feet no longer walk the earth but, in those he taught and teaches – those touched by his heart – his legacy continues.

James received teachings from him and said that he found him to be very impressive and at the same time very kind, helping him a great deal.

Hopefully, for those of us who are practising the dharma, knowing a little bit more about this great being’s way of life is more inspiring than daunting and perhaps highlights what is of genuine value in the way we spend the remaining precious hours and energy of our own lives.

Whilst direct imitation is unlikely to be the way for (m)any of us! … any move we make towards a whole-hearted commitment to the welfare of all beings, to practicing so that we are bringing the dharma through and as us into each moment of the day, will act in some measure as a counterbalance to, or dissolution of, the turbulence of these times… and move us more and more in his direction.

With great sympathy for those close to him who feel bereft, and especially kind wishes to his wife from whose interview much of the above information was garnered.

Here are some words of advice from a talk he gave at Bodhgaya posted on the Shambhala blog.