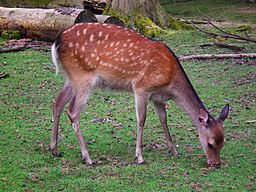 I was talking with a homeless man who had in his hands an envelope… not bad news as it turned out but good, so good he could hardly believe it – that he had been found a place to live in, a place where he could cook and where perhaps his daughter might visit him.

He had recently been very disappointed as a tenancy that had been found for him was withdrawn at the last minute by the landlords – but that place did not have cooking facilities and this new place was much more suitable.

For many years he had been living alone in some woods. His business had collapsed, it was a small business employing nine people, and in the disappointment and sadness with himself and life, he retreated completely.

He told me that two things had brought him to a point where he felt he could engage again with society.

The first was that one day a deer with a fawn at foot walked into the clearing where he lived. It looked about, sniffed the air, and then eat a few leaves before leaving… he felt accepted by the wood and its creatures – he felt he belonged.

The second was when a teenager detached herself from a group of other teenagers walking over a bridge and came and sat down beside him, beside the river, for a few minutes. She said  ‘you’re all right (his name), you’re all right!’

Seven words… and her gesture of leaving the familiar to sit briefly with the outsider…no pushing, no judgment, made such a difference.

so all good luck to him… and the teenager…and our homeless bothers and sisters.

After Cathy  is an excellent and powerful radio documentary formed of the recordings of the lives of three homeless people compiled fifty years after ‘Cathy Come Home’ shocked the nation (well, some of it!)

Likewise “do not take lightly small misdeeds, believing they can do no harm:even a tiny spark of fire can set alight a mountain hay”

– from The Words of My Perfect Teacher by  Patrul Rinpoche…a book which fell into my hands when visiting my mother in Malta many year ago and is an inspiring, comprehensive and very readable explanation of the dharma pathways and pitfalls.