Q.Why go to watch a film which is a monologue delivered by an ex-prisoner from America’s 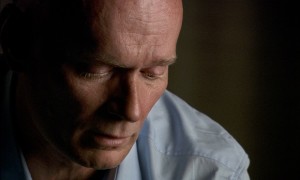 A. Because its an extraordinary true story of actions having consequences way beyond what one might imagine…. of someone not inherently bad but coming to behave badly as one thing led to another…of judgments based on prejudice…of love, growth and of beautiful actions suddenly sparkling like diamonds in the muck…of luck/karma and its exhausting twists and turns.

After 23 years on Death Row a convicted murderer petitions the court asking to be executed, but as his story unfolds, it becomes clear that nothing is what it seems.

A Death Row inmate petitions the court asking to be executed. As he goes on to tell his story, it gradually becomes clear that nothing is quite what it seems. THE FEAR OF 13 is a stylistically daring experiment in storytelling that is part confessional and part performance. Nick, the sole protagonist, tells a tale with all the twists and turns of classic crime drama with a final shocking twist which casts everything in a new light.